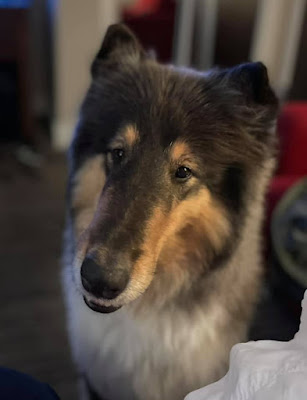 I don't post very often about Ash as he is not doing any performance things and he is done showing as well. Rest assured though that he is enjoying his life to the fullest. He is probably the sweetest dog I have ever owned and we love him very much! On September 14 Ash had to go to Calgary for teeth cleaning as well as needing some extractions. He wasn't able to have it done in town as he was high risk to put under anesthesia. When Ash was neutered he would stop breathing. Ash is MDR1 mutant/mutant. This is a gene that affects Collies and Collie crosses. It makes them super sensitive to medications and anesthesia. Some Collies are normal/normal and some are normal/mutant so they are less at risk. Anyway we drove down the night before as he needed to be at the clinic early. The surgery went off with no issues, yay! He needed both lower right side back molars pulled. The one had extremely inflamed roots and the one beside it had a cavity down to the pulp. Poor Ash must have been so uncomfortable! He also had 2 lower front teeth pulled. One had started sticking straight out for some unknown reason and I'm really not sure about the other one but I bet it was also moving. It's been just over 2 weeks since the surgery and everything is healing nicely. He still has stitches but those will dissolve soon. I am now brushing Ash's teeth. He is my first Collie that won't let me scale his teeth so brushing it is! Hopefully he won't need any more surgeries in the future.
Posted by onecollie at 2:04 PM

We are glad Ash is doing well. Both of us are doing well and enjoying the cooler weather in Key West.

onecollie
I moved to Lethbridge from Thunder Bay, Ont. in October 2007. I have been involved with dogs all my life. I was a dog groomer for 30 years, 15 of those I was self employed. I retired from grooming in October 2007 but returned to it in 2016. I retired again in 2021, this time for good. Collies are my love and I could never imagine owning another breed..... However, I have fallen in love with Flatcoated Retrievers !!! This blog will mostly be about my family, my collie Tate, my collie Kort, who joined the family on June 29 2008 & Lync, a flatcoated Retriever who joined the family on December 15 2013 :) Sadly Tate passed away on November 3rd 2014, we miss him terribly :'( but with the end of life comes new life, and it is with great joy I would like to announce the addition of a new Tri Colour Collie to our home, thankful for the generosity of a very special friend, Ash came to live with us on March 5, 2015 ! :) So begins a new Chapter!! On October 20 2020 Kort passed away at the age of 12 1/2. Our hearts were broken. It's so hard to loose them. Our family now consists of just Lync and Ash. Hopefully they will be here for many many years . 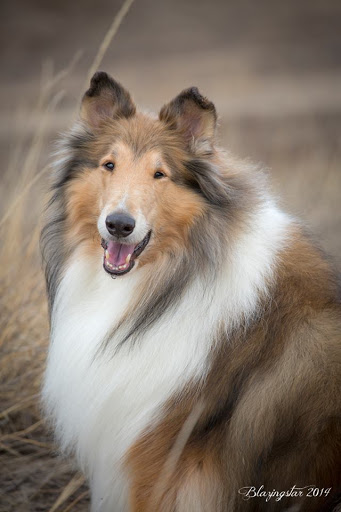