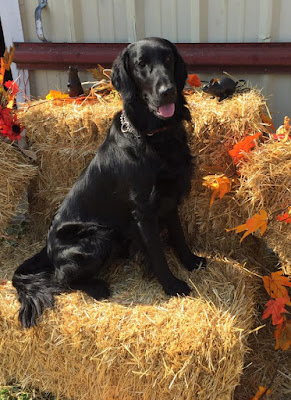 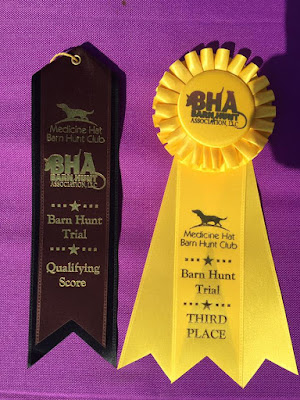 So much to post! I am so behind in doing so.  Not that anyone reads them anymore, like my friend Diana says, more people post on Facebook then blogging now, sad, I love to read blog posts and I love to post!
Warning, VERY long!
Here goes....

Spruce Meadows
Trial 1, Lync was such a good boy, focused and happy.  We got through all the exercises but on the heel free he found a smelly spot on the grass and I couldn't get him away from it, I ended up giving him 3 extra commands which failed us.

Trial 2
Lync was again doing well, somewhat more laggy then the day before but still good, today was a Q for our first leg!! yay! We got a score of 187/200 which was pretty good I think.

Trial 3
Lync was much more unfocused today.  Just as we were entering the ring a flatcoat walked by us and Lync spent the entire time in the ring looking for him. I couldn't believe the bad timing.  Our dogs are supposed to be proofed for all situations but this was very hard for Lync. We were still passing when it came to the recall, he just sat there! I couldn't believe my eyes, I was so disappointed.

Edmonton
Trial 1
This was another outside trial.  The dog just before us was a female Rottweiler.  On her heel on leash she peed in the ring, seriously! What bad luck we are having. The judge was kind enough to make our heeling pattern away from the spot but it was not far enough for Lync.  As we passed by the spot he left my side to check it out. Another NQ for us.

Trial 2
Lync was doing ok, I could tell he was not happy though, he just wasn't his usual happy self.  Maybe I entered him before he was ready? Maybe it was the heat? Who knows. Anyway he didn't come again on his recall, at least the judge had me return to him instead of calling him again, she didn't want him to get used to getting a second command, I agree.

Aldersyde
Trial 1
Lync did fantastic! He was a pass all the way up to his long down.  The Golden right beside him decided to flop down on to his side, it was too much for Lync to handle, he got up to look at the Golden, another fail and a very very disappointed Jolene :(

Trial 2
Lync was horrible on his off leash heeling, lagging was behind me, even stopping at one point and not coming to my side on a halt.  Then on the recall he just sat there AGAIN!! What the heck? This is becoming a bad habit and I don't like it, of course his long sit and down were perfect.

I am not sure what I want to do from here.  I am taking a break to think about it.  There is our local trial in November.  I might enter Novice or I might enter Rally Advanced, I'm just kind of frustrated still.

Soooooo, that brings us to last weekend.  After only one workshop I decided to enter Lync in Barn Hunt in Medicine Hat.  I LOVE this sport!!! More importantly Lync loves it too!  There are 4 levels, Novice, Open, Senior and Masters.  Each level gets more difficult and more cylinders are added for the dog to find.  The cylinders contain gerbils as Alberta is Rat free. The gerbils are perfectly safe in the metal cylinders.  In Novice we are given 2 minutes for the dog to search the course of hay bales and find the cylinder that contain the gerbil. There is also an empty cylinder and one containing litter.

In Trial 1 I talked Lync into indicating the wrong tube.  In my inexperience I got excited that he found a tube.  I was saying things like " is that your rat? " Lync in his inexperience pawed at the cylinder,  unfortunately it was the cylinder containing just the litter, bummer NQ
We had another trial that afternoon.  I was quieter and let Lync work , he found a cylinder, pawed at it, I called it but nope , it was another litter tube.

The next day we had 2 more trials.  In the morning trial I let Lync work.  He found a cylinder which I called, it was the rat!! yay! To Q the dog must also climb onto a hay bale and go through an 18X18 tunnel. In Novice the tunnel is straight and they can see the other side.  It is difficult for the large dogs as they basically have to crawl to get through. We had our climb and just needed the tunnel. Lync was having trouble, he did not want to go through, after about 10 pleadings on my half he finally did it! yay! Our first Q! Our time was just under the 2 minutes, lucky!

The afternoon trial went great as well.  Lync found the tube, got his climb, and after just 2 commands of tunnel he went through, Q 2 in a time of 37:50 seconds.

In October we will be travelling to Strathmore to compete again.   He is entered in 4 trials so hopefully he will get his last leg.  We will then move up to Open where we have to find 2 rats and there are 2 litter tubes and 1 empty tube.  The problem will be the tunnel, there is 1 turn in Open so he can't see the end.  I don't think he will do it but we will try.

Whew! that's all our news for now. Stay tuned for more after the next trial.
Posted by onecollie at 9:01 AM 3 comments: