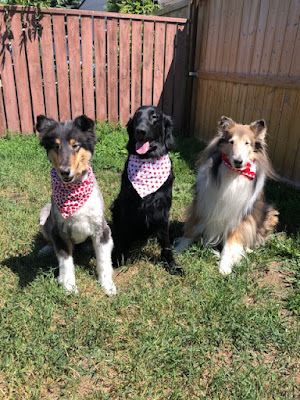 On Friday June 28 I finally shaved Ashes coat off!   I have been wanting to do so for quite some time and finally bit the bullet.  I'm sure there are some people going to say hurtful things because I did it, they already have on Facebook .  Those people have no idea the struggles I had with his coat.  Since he was neutered it has tripled in size.  The neuter hair was horrible to keep and matted easily. His rear end and neck were the worst.  To keep him up I would need to bath and dry him every 3-4 weeks and I didn't have the means to do so. Ash also did not like to be tugged at. I work in a grooming shop and had been bringing him there for bathing as I cant do it myself anymore.  He started taking longer and longer to do and my employer had finally said no more as it was taking my co workers away from doing the paying customers.  In order to have him fully bathed and brushed out I was looking at paying about $100.00-$150.00 which I couldn't possibly afford.
He looks like he is shaved to the skin but he isn't , there is a layer of fluff there.  My plan is to now grow him out for 3 months then keep the hair in a fluffy teddy bear groom about 3/8" long.
I think he looks super cute and Ash loves it!  He's been acting like a puppy since it was done.  This morning I was able to take him and Lync swimming at Lync's breeders house.  If he had his full coat he would have stayed at home.  He had a blast and is happily sleeping now :)
So that's the story behind the shave, Ash is the first Collie I have owned that didn't have a coat that was easy to keep.  He is my 5th Collie.
Posted by onecollie at 2:09 PM 2 comments: