Everyday when we get to work Amanda has drawn a new picture up on our bulletin board....
This morning it was of me, Tate & Kort :))
Can you tell which collie is which ? 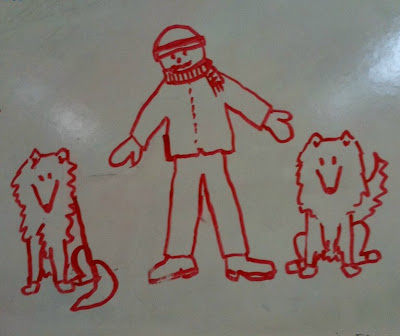 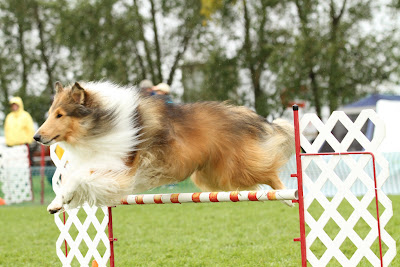 Tonight I braved the 65 km winds, & white out conditions on the highway, to make it to Kort's agility class!
He did really well on the course Sarah & Amanda put together. He even took his weaves , popping out of just one pole.
I am persevering in agility as Kort loves it, everything I do, I do to make my dogs happy :))
Posted by onecollie at 10:18 PM 4 comments:

Thanks Amanda !
Look for the leg chewing after the about turn during the off leash heeling....makes me laugh :))

Amanda made me the following video of one of Kort's Novice runs from the weekend.
I did not realize just how awesome he did, seriously!, wow!! I am so proud I could just cry, kidding! :)) 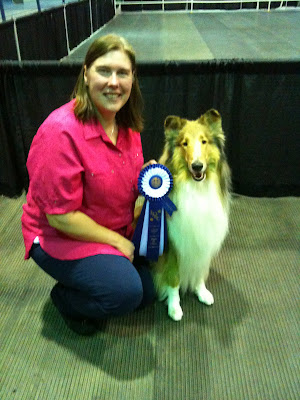 It certainly has been a weekend of emotions for me !
I have been, excited, nervous, worried, sad, annoyed, happy, elated,& proud.
DAY ONE : , Morning trial, Kort was awesome, but, on his long sit he laid down to chew his leg as I was walking back toward him!!! Seriously, he couldn't wait 5 more seconds! I thought it was just a fluke, he's never had a problem with stays.(score would have been 190)
Afternoon Trial, he was a good boy, worked well, sat for his stay & got his 1ST CD LEG with a score of 179!! He was also high scoring collie & got a special prize :))
Kort has never liked to sit when I stop, even in rally, we have been struggling with this, so his score does reflect quite a few, "no sits"
DAY TWO:, Morning trial, again, awesome work, but laid down on his long sit. This time I told him he was a naughty boy!, but then I had a meltdown, I cried, I was mad at Kort, but upset at myself for being mad at him! I am grateful for having such great friends. Everyone tried their best to comfort me, but I was questioning myself & whether I was cut out to do dog sports. I take everything so seriously! Amanda had me go walk around until I could bring myself to "talk" to Kort without feeling annoyed. She then went & got him out of his kennel & took him for a walk to visit with people to make him feel better. When I was ready she brought him over to me & I hugged him & told him he really was a good boy.(score would have been 183) Thanks Amanda, I still feel like a bit of a fool for reacting so stupidly!
Anyway, moving on to the Afternoon trial, Kort pulled it all together, sat most of the time, did a perfect recall, chewed on my pant leg on the heel free :)),& stayed for his long sit!!!, even though he shifted onto his hip & I was having heart failure! He passed earning him his 2ND CD LEG!, with a score of 187.5, & a High Score in Novice A !!!! Yeah for Korty!
I am a little worried though about his hips now. Our agility club is bringing in a specialist that does dog evaluations, laser therapy, acupuncture etc. & Kort is going. I will be very interested in what she has to say about him.
We have another trial in 2 weeks in Calgary, with any luck Kort will have his CD before the end of the year.
Kort & I would also like to congratulate all of our friends & their Q's this weekend.
Amanda & Pixel , 2 Novice Q's
Sarah & Kaleb, 1 CDX Q , 3 Rally Excellent Q's & his RE title
Vicky & Claire, 1 Advanced Rally Q
Liz & Lupine, 3 Rally Excellent Q's & her RE title
You all rock!
Last but not least, I would like to thank Dianne ,who owns Kort's litter brother. She came up here from Edmonton for support!! Now how is that for a great friend! We had a blast together & tons of laughs! Someday I will repay the favour & come up to Edmonton to watch Duffy in the obedience ring!
Posted by onecollie at 7:39 PM 6 comments:

Today was a big day for Tate & I, we had our first official visit as Therapy Dog volunteers.
It went just how I had expected, Tate was awesome & made me very very proud. We did not have a big group today, maybe 10 residents, plus some staff members. Oh, we also had 3 other dogs that belonged to some of the residents! Tate took it all in stride & hopefully managed to brighten up their day just a bit :))
I am hoping we will attract a bigger crowd next time as word of mouth gets around , in the meantime we are looking into visiting at a 2nd home, so stay tuned for those updates as well.

Tate, Therapy Dog Extraordinaire in the yard before leaving home ...... 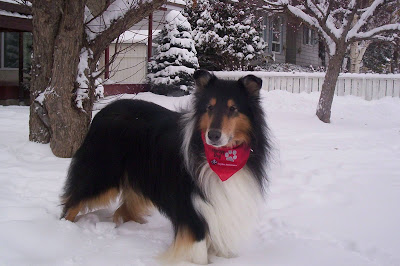 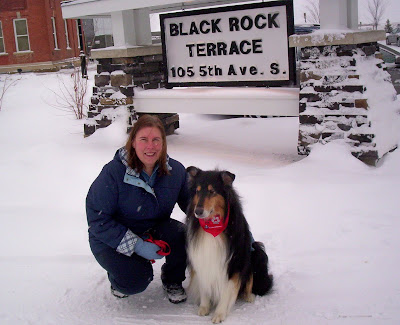 Tate & I with Charla the Black Rock Terrace Event Coordinator...... 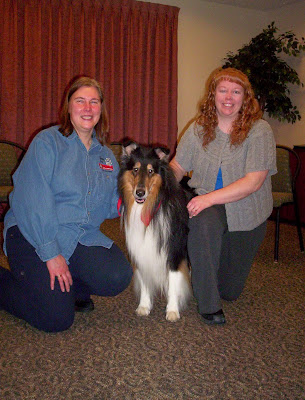 In this picture Tate & I pose with one of the residents & her dog Morris, plus 2 of the kitchen staff that happened by...... 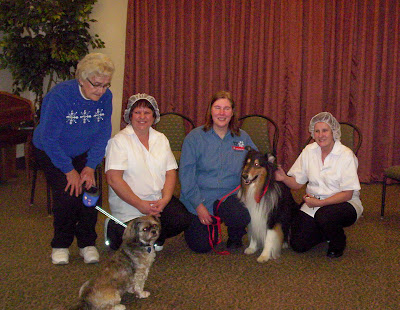 In 8.5 years that I have owned Tate I have never ever seen him sleep on a bed....a dog bed that is!
He sleeps on our bed & on the couch, but a dog bed, on the floor??....no way!!
This morning I came out of the office to find him on Kort's bed in the livingroom....
me thinks he has discovered just how comfortable they are :)) 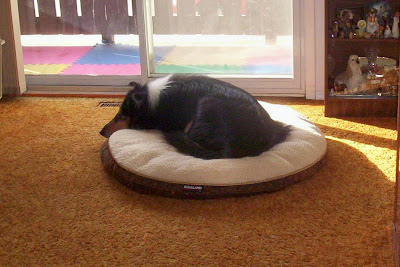 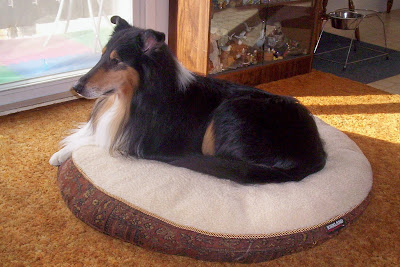 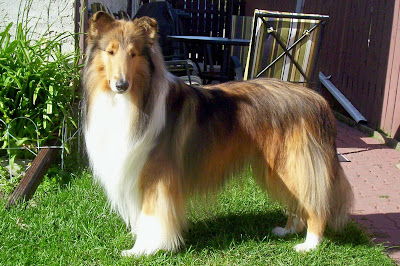 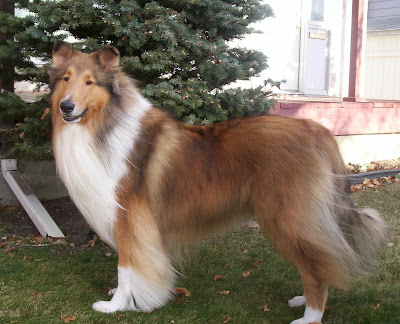 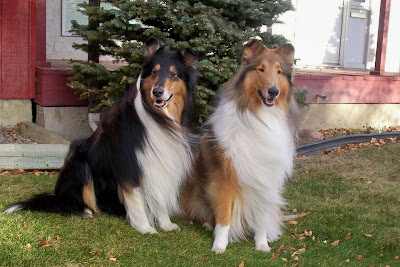 I seriously suck at agility these days :( I feel like I am letting Kort down. I have many excuses, but no one wants to hear someone complain all the time, but I just want to say that sometimes I just hurt...seriously. Today was a long day for me, I had a fantastic walk with my friends & our dogs. I enjoyed every second of it :)) I had to bath Tate right after as he goes on his first therapy dog visit next week, & today was my only free day to do him. He took me 3.5 hrs. Then I brushed Kort out for another half hr. Kort gets his bath on Saturday for next weeks trial.
So, I got home about 5:15 & I left the house this morning at 9:45, then left for agility at 7....I know for most this seems like no big deal, but like I said, I hurt, my neck hurts, my back hurts & tonight my wrists & hands hurt, & when I hurt I don't sleep, or I wake up hurting in the middle of the night . See, complain, complain complain !
Anyway, I really need to think more on continuing with agility....as much as Kort loves it, perhaps I am not doing him any favours if I can't get motivated enough to encourage him properly?
Posted by onecollie at 10:19 PM 5 comments: 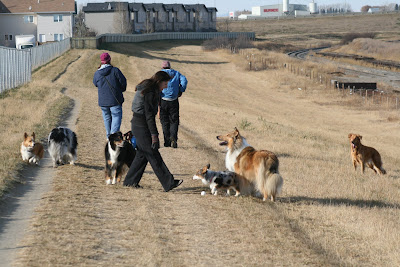 This morning Maureen, Amanda, Wendy & I ventured out for a brisk morning walk with the doggies :))...... 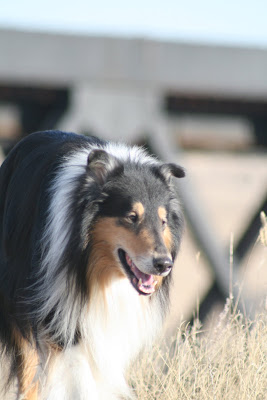 Thanks for the pictures Amanda !!
Posted by onecollie at 6:08 PM 1 comment:

Snug As A Bug

Wendy just sent me this picture she took of Perkins at the daycare today...she titled it Snug As A Bug......can you see Perkins nose peeking out from under the blanket !
He approves of the new beds at the daycare :))
Seriously, how can you not love this dog !!♥ 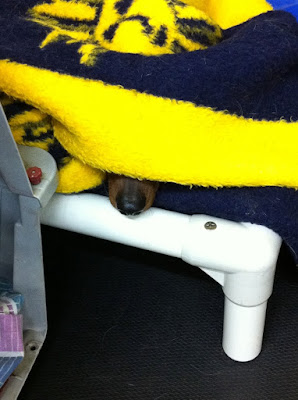 Pixel is here for the weekend & Kort is very happy :), he has someone to run around & play with & to help him steal things LOL!!
It was so gorgeous yesterday that Brad & I had a barbecue, it was awesome to be sitting outside on Nov 6th!, hope this weather continues for awhile !

Pixel wants you to know that she was just an innocent bystander...... 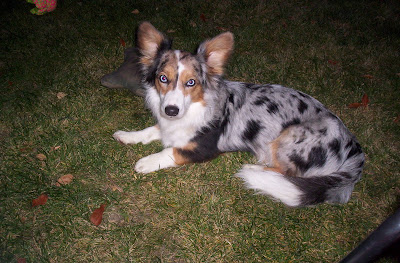 She had absolutely no part in the stealing of the cheese slices !......

No cheese was harmed/eaten in the taking of these pictures :))
Posted by onecollie at 3:11 PM 6 comments: 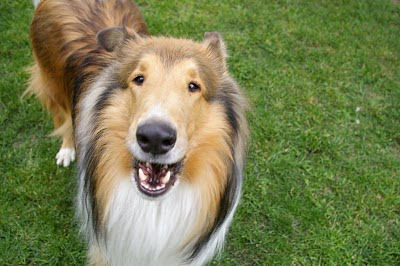 Tonight was our first agility lesson in "The Barn." The drive out there was "interesting " to say the least. I had directions, however it was sooooo dark, I couldn't see anything !! I was just starting to wonder if I was going to end up in Montana when I saw the first sign , whew! Also, it was the first time I have driven my new van in total darkness & I had no idea where the high beams were...kinda important, no?
When I got home I sat in the driveway & looked for them, then practiced turning them on & off so they were familiar for next week .

Kort was awesome tonight. He was super focused & did everything I asked. He barely noticed he was surrounded by horses! He still hates the tunnels, & even with Amanda blocking his path to the frame he tried to sneak past her & run up it instead of taking the tunnel ! We are working on the tunnel being a "happy" place & I reward with tons of treats when he takes it. Most dogs LOVE the tunnel, Tate disliked it also.
We did threadles & serpentines & Kort did super !, my handling was also much better . I sucked at front crosses tonight, but I think it was the dirt, running in it was not so easy! I will improve, my legs just have to get used to running in quick sand LOL!

I am glad it was a good night for us, I lack the motivation to go to agility these days. I keep going because Kort loves it & he is good at it. I am always glad at the end of the night that I went, but I wish I was enjoying it more, any thoughts on this problem of mine ! :))
Posted by onecollie at 10:29 PM 7 comments: