Thanks for the awesome picture Amanda !!!!
Posted by onecollie at 5:20 PM No comments: 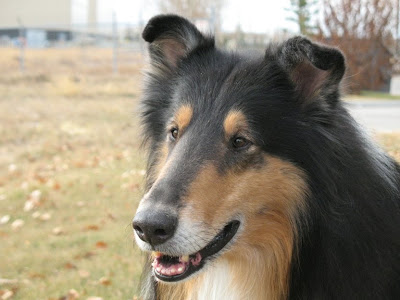 Thanks for the pictures Val !!
Posted by onecollie at 10:12 PM 3 comments:

Before Perkins left for home on Wed. he made sure to make me smile......before and after he left.....
Here is Perkins making himself comfortable, as only Perkins can do, in my bed sheets. He made a nice little nest for himself....this was the "before smile"......

The "after smile" came later in the day when I was getting the sheets for the wash, Perkins had gathered a bunch of different toys & had them all buried in the sheets like treasure!
To know Perkins is to love him!!
Posted by onecollie at 11:27 PM 3 comments:

People have been staring alot lately while I've been out walking the dogs......
Hey!,one of these dogs is not like the others! .......


This is Allie, she is my cousin Lynda's Norwegian Elkhound. I took this picture of her on my trip to Thunder Bay in Sept. She is 16 & a half years old. Allie has always been special to me. In 1994 Lynda & I packed up baby Allie & 4 year old Drake to travel to both of our Am. Nationals. We had a blast together, & the dogs adored each other. When Drake passed away & I got Tate, he too loved Allie. I think I felt connected too her because she "knew" Drake.
Today Allie will cross over to the Rainbow Bridge & a piece of my heart will go with her.....goodbye Sweet Allie.....

This picture of Tate & Allie was taken in 2004, 10 years after the pictures below.

These 2 pictures of Drake & Allie were taken in 1994 when Allie was just a junior puppy.

From a very early age, I have said that Kort is almost like a twin of my Drake. As Kort continues to mature it is getting more obvious. These are 2 pictures that I feel show that I am not imagining it! The picture of Kort is from my weekend in Edmonton & the picture of Drake is when he was 3 yrs old back in 1993.....Kort will continue to get darker, you can see the "saddle" pattern on both of the dogs sides...as collies age, & with each shed, the saddle gets lower & darker, Drake was very dark when he was fully mature!


We are back from the Edmonton dog shows with amazing news! Kort suddenly decided he was a show dog & we became a perfect team! It felt wonderful and I grew more confident with him everyday. We still have to figure out how to stop the barking that he does when gaiting in the group ring, just a tad embarrassing!
On Friday we went Best of Breed & took a 3rd in Group from the 12-18 month class!! I can't begin to tell you how exciting that was....Kort beat out Best in Show winners for that placement! He got 2 points for the Breed win & another 2 for the Group win....plus 40 breed points!!
On Sat. we had no competition, so no points were awarded, & we didn't place in the group.
On Sun. we took Winners again & Best of Opposite for another point! Kort now has 7 points toward his championship......
Here are our photos from the weekend, thanks to Kathy French Photography for the show pics, & Dianne, who owns Kort's litterbrother, for the in the ring candids!

On The Road Again ! 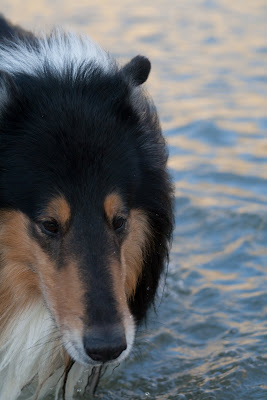 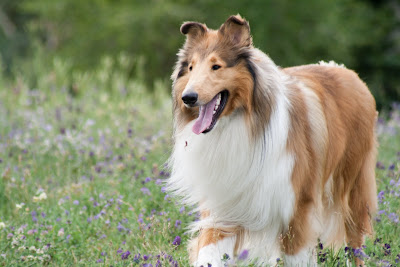 Tommorrow morning Tate, Kort, & I will be hitting the road for the Edmonton Dog Shows......talk to you when we return!
Posted by onecollie at 7:52 PM 4 comments:

Amanda & I took our dogs to a local fun match yesterday.....I wanted to get some practise in before the dog show in Edmonton this weekend, & I also wanted to see where Kort was, obedience & rally wise, as there are trials here in November. We had a blast & Kort did awesome!!! The rally was set up for advanced & not novice but I thought I'd give it a try, Kort did really well, he even took the jump for me!! It was the first time he had seen rally signs set up so he wanted to smell each one!, something to work on.
I then did a novice obedience run & Kort tied for first place with a 187!!! He was soooo good, super attention, a few little things I need to work on, but I was very pleased with him!! It was wonderful to be working in obedience again & I can say that Kort is my best "heeler" ever!! He is not quite ready to trial yet, but he has lots of time, he's only 16 months old.
I was also very happy with how he behaved for the conformation match, for the first time ever, he stood still to be examined, yeah Kort!!
Here are some pictures Amanda took, the first one is Kort's on leash heel work, the next 2 are off leash.....the last one is Kort really wanting the bait !

I Couldn't Help Myself !!


Yesterday I went into the Pet store to get some dog treats for the weekend. They just happened to have a new shipment of dog beds.....I couldn't resist buying one....not for Tate or Kort, but for Perkins!! He just happened to be coming to stay for the weekend & the beds were so darn cute, I had to get one! Perkins took one look at the bed & knew instantly it was for him, he curled up in it & slept all night.....except for when Kort was in it that is! Yes, you heard right, Kort, my jealous boy, was having nothing of the fact that Perkins got a new bed....he actually tried to sleep in it but could only fit his elbows & part of his chest....it was hilarious!

Laughing At One Self !!

Amanda was fooling around with her camera earlier in the week, she told me to make a bunch of different faces so , being the fool that I am, I did! Little did I know she would make it into a collage!! It's kind of funny so I thought I'd blog it....enjoy!...... 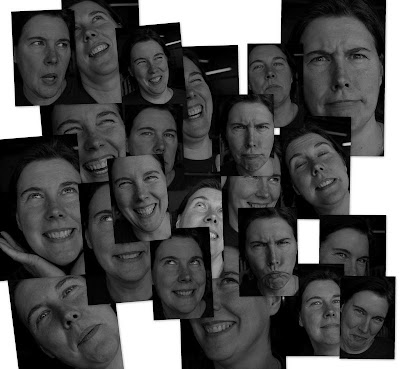