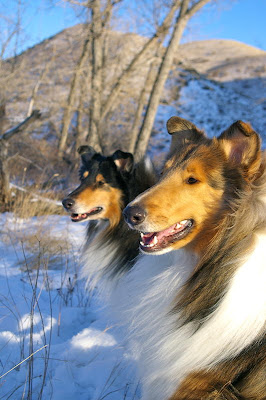 All my friends have been talking about their goals concerning their dogs, so I thought I would give it some thought also.

For Kort I will finish his championship. He just needs 3 points so I know it will happen.
I want to begin trialing him in obedience & rally this year. Hopefully putting his CD title on him as well as his RN.
I want to begin tracking & I know he will excel at that.
I will continue with his agility training, but trials will not be a priority at this point.

With Tate I want to put him in some AAC trials in agility! He will be 8yrs. old in April & he qualifies for the double drop so he can jump 16". Tate has always loved agility the best, so I want to bring him out & have some fun, maybe get his starters title!
I would also like to get back into tracking with Tate...maybe put a UTD on him or possibly a TDX!
I also want to show Tate at some point in Veterans. It says alot for a dog to be a Veteran & still look as good as they did when they were younger, except for the grey muzzle, which by the way I love!

Happy New Year Everyone!
Posted by onecollie at 5:48 PM 4 comments: 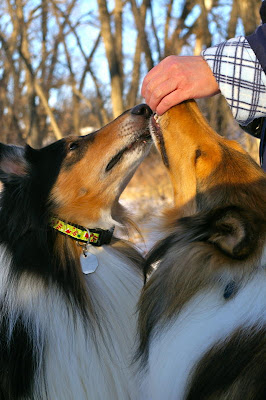 Amanda has managed to take some fantastic pictures of Tate & Kort again today!! These ones are even better!
Here you go......
I have included this one of Tate even though the wind blew his ear prick....that's how much I like it!...... 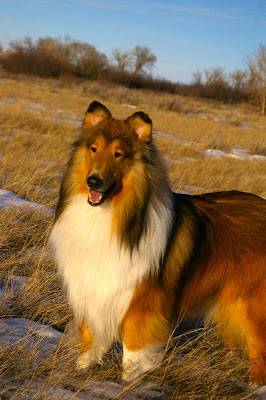 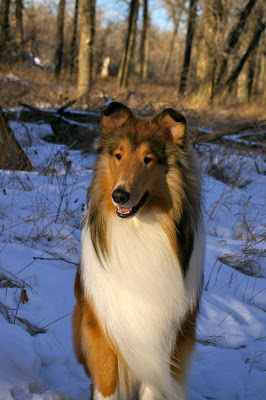 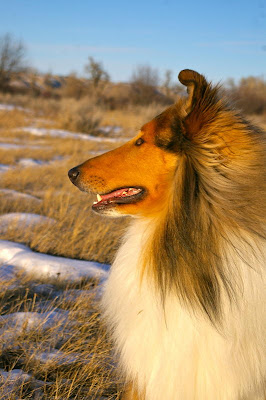 I love Lethbridge, it has the best places to take pictures, which just happens to be my favourite thing! Of course it has to be dog pictures!
Today Amanda & I packed up Tate & Kort, and 3 of her dogs, Pixel the cardigan corgi, Vito the border collie X & baby Tripp who she is dog sitting. Tripp is a miniature Australian shepherd, who is the cutest puppy!
Amanda took more amazing pictures today, so here you go....... 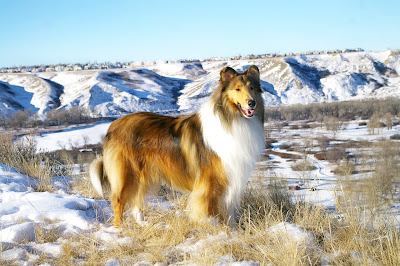 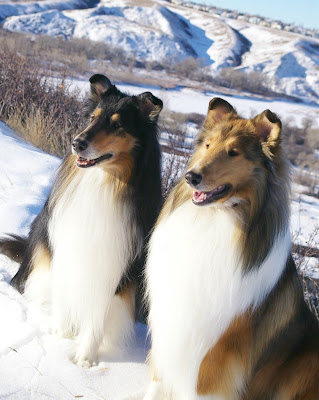 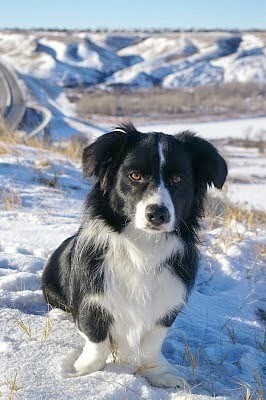 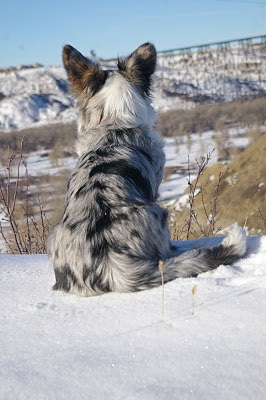 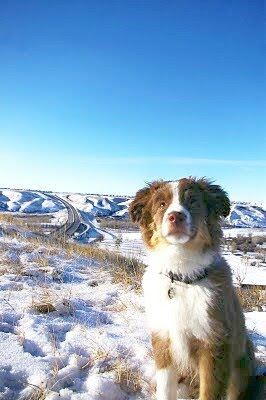 For my blog followers that can't get enough of the wee Perkins....here's a couple more pictures for you......
Perkins trying to tip over the toy bin so he can choose the best toy......


Then, once they are mostly dumped out & all over the floor, Kort comes along & thinks they make an awfully comfy bed!......

Favourite Doggy Pictures From The Day....


Of course I took tons of pictures from Christmas morning, here are some of my favourites.....the dogs were all very happy with their gifts!

So, apparently I have a secret Santa! As I left early this morning to walk the dogs there was a box sitting in front of our gate. I put it inside & off I went to walk, all the time trying to think who the box was from......
When I got home & opened the card, it just said that we were all on Santa's good list, but the card wasn't signed!..drats! When I opened the box it was loaded with cool things!
Here is the card, and the Reindeer postage.....plus the tons of gifts that I found inside, something for everyone!
Seriously though, who ever it is, tell me!!......but if you don't tell me , I just want you to know that it brought tons of happiness to our day, and we all thank you very much!
Merry Christmas!

Dreams come true!......
Kort has been dreaming of a new bed for quite some time now, & seeing as he has been a pretty good boy this year Santa dropped a gift off early for him......

Perkins also had a dream, so he patiently waited......

While I was in the shower this morning Mr. Hedgehog met his demise......I think it was quick so at least he didn't suffer!~

All Ready For Santa!

Today Kort got his bath, so now he & Tate are all ready for Santa! Perkins is staying with us also , he had a bath too, however, he was not in a very co-operative mood so I could not get his picture. I will keep keep trying !
The picture below was taken of Tate & Kort last Christmas.....I can't believe how much Kort has changed!!......


Huge congratulations go out to my second cousin Katie who married Brad today in Las Vegas....I'm sure they had the longest engagement ever!.....it has to be at least 8 yrs!

This is what happened in the middle of the night....Not even kidding!

Every winter we have visitors in our yard.....deer....lots & lots of deer. They come up to eat the sunflower seeds that the birds have spilled from the feeders as well as the apples that have dropped to the ground.
Kort is fascinated by them...he sits & watches them through the window...this picture was taken this morning, if you look closely through the deck you can see the head of the deer eating off the ground.

Well the tree is finally decorated & it has lights! For those of you that are not on Facebook, I had a slight "problem" yesterday with the tree lights. They were on the entire time I was decorating the tree, then, just as I finished they all went out! So, after alot of cursing , & a little bit of crying, I found the solution thanks to Sarah. I just went out today & bought 2 new strings of lights & carefully managed to put them over the burnt out ones, while still leaving the burnt out strings on the tree! Whew!
The tree does look amazing though so I guess it was worth all the heartache....


Here is some of my snowmen collection that I have received as gifts over the years......

Hopefully I will have no more tree issues!
Posted by onecollie at 10:57 PM 2 comments:

This is our 3rd Christmas in Lethbridge. This year seems harder for me for some reason, I just can't seem to get fully into the spirit. I am missing home more then ever & I think that is the main reason.
So, to help myself feel better I told Brad we were going to buy a real tree this year. We always had a real tree in Thunder Bay, but the last 2 years I have put up our artificial one.
We went to get it today, I looked for the tallest,fattest one I could find.
Here it is thawing out, & waiting to be decorated. I won't be able to do it until tomorrow though as it will take that long for the branches to drop. The house smells wonderful already & I am being to feel better!

Stay tuned for the decorated tree!
Posted by onecollie at 5:24 PM 6 comments:

Some Kind Of Joke

Mother Nature is playing a very nasty joke on us right now!.....-49C this morning!...come on!
This weather is only fit for one animal, & it isn't humans! 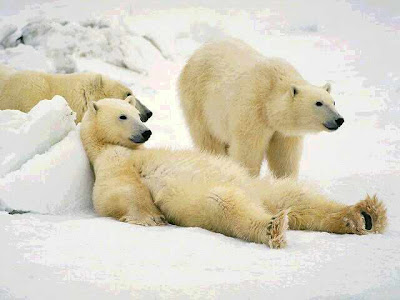 
Ugh!!!! Yesterday Lethbridge had their first snow storm of the year, & it is STILL happening over 24 hrs later! I spent 2 hrs this morning digging out of the house! The dogs are happy, well, Kort is happy, Tate, not so much. Brad & I did manage to make it out for groceries, good thing too as the storm has worsened & I don't think we are going anywhere for awhile! 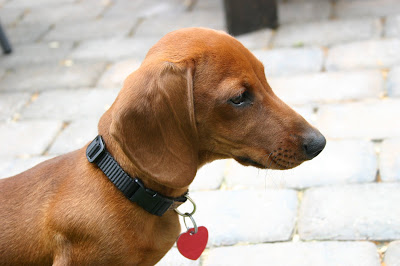 OMG!!!!! how cute was Perkins as a baby!!!! Wendy sent me these pictures of "my" Perkins for my collection! Thanks Wendy, they sure brightened up my day! 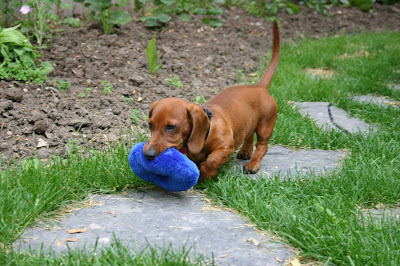 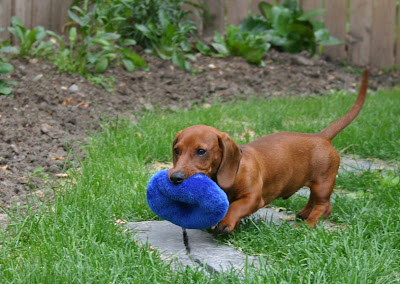