Last weekend was our local Dog Show here in Lethbridge.  I entered Lync in Novice Obedience and Ash in Conformation. Well what a fantastic weekend we had.  I still am floating on Cloud 9! 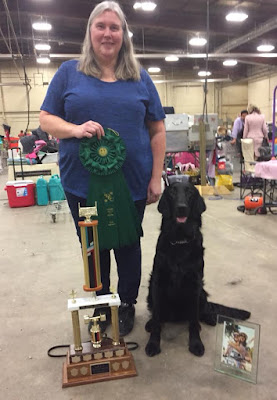 I'll start with Lync, Day # 1 he passed!! I was so thrilled, we have been to 6 trials before this one and NQ'd in each one, so passing was about due!
Day # 2 he passed again, giving him his CD title!!  Wow it's been 7 years since I put a CD on a dog. Day # 3 I almost didn't enter, I decided to put him in, thanks to Amanda, for practise in the ring.  He has a wee bit of ring stress going on so we need to work on that. Well you guessed it, he passed again !! We also went High Score in Class!  Then I got a surprise that I won't soon forget.  There was a special trophy offered for High Aggregate Scoring Novice dog in either the A or the B class, Lync ended up winning this Award . What was even more special was that Lync's mother Kona also won this award 4 years ago on the same day!
I was very honoured and proud to accept this award with Lync, we have worked very hard and are becoming a great team together.

Now for Ash, on Day #1 there were 2 shows offered.  In the morning I showed him myself, we were the only entry so we won Best of Breed and got to have some fun in the Herding Group as well.  In the afternoon I ended up with a conflict with Lync in Obedience.  I was lucky to find someone to show him for me! There was a female entry and she won the Breed so no points for Ash.
Day # 2 I had someone show Ash for me again. Ash won Winners Male for 2 points putting him at 9, 1 point to go!
Day # 3, Ash won the points again and finished his Championship!!! Yay !! So exciting!

I will now take a bit of a break until the new year before starting Open training with Lync.
Posted by onecollie at 3:31 PM 3 comments: