Today I scanned some old photos of my collie Drake who passed away in 2001.  I've been thinking alot about him lately . Drake lived until the age of 10 years & 9 months to be exact.

When Drake was 10 years & 7 months, he developed Heart Disease, I lost him just 5 weeks later.

Tate is 10 years & 7 months old right now.
I can't even comprehend that fact looking at Tate.  This morning Tate was out running around chasing Kort & having a great old time .  I cherish every single second I have with him, not to say I don't cherish every moment I have with Kort, but you know what I mean.

Ben , my very first collie, lived a full life until the age of 13 years, I always expected Drake to live at least that long, which is why it was so very hard to deal with at the time.

Never take anytime with your dogs for granted, that is what I remember every single day ♥ 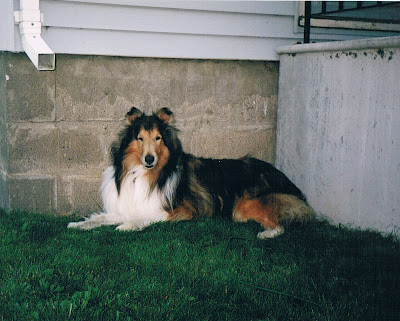 Grooming for the 10 & over Veterans Sweepstakes
Ready for the Ring :) 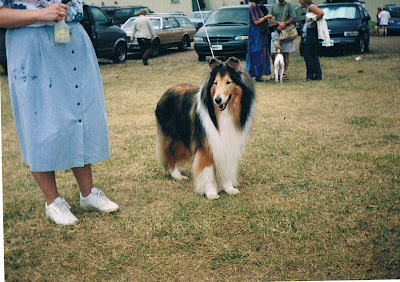 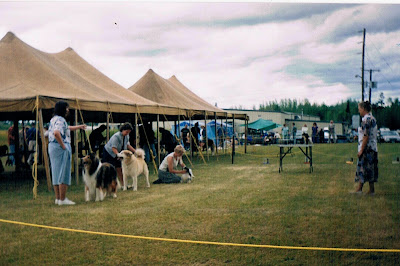 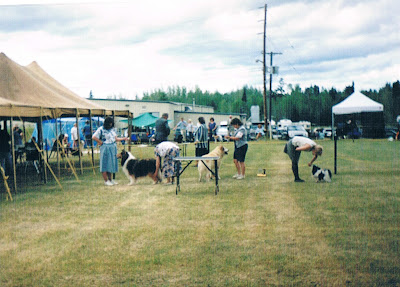 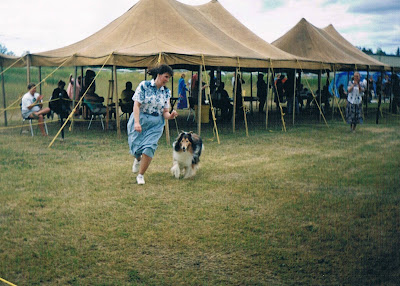 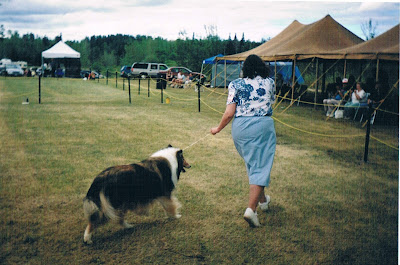 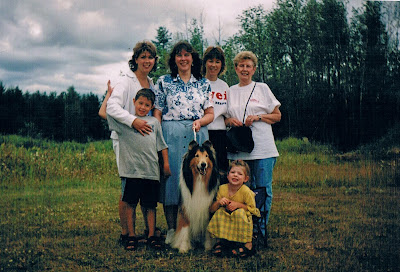 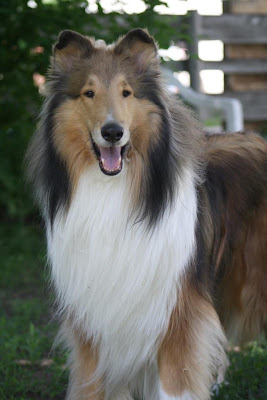 Well this weekend did not go as I had planned.
I had hoped for Kort to make his debut back into the Obedience ring after his years absence.

On Friday night there was a Fun Match which I entered.  Kort & I approached the ring after a great warm up.  Kort had wonderful focus & energy until I set him up at the ring entrance.  Immediately his head went down, away from my eye contact, & he looked at the floor.  I left the ring entrance &  played with him a bit, then approached again, after a moment of not looking at me he looked up.
His heeling was unfocused for most of the time, looking away, at the floor & lagging, even with encouragement, play, & food.  I did not do a full routine.   After the heeling I ran him over the high jump a couple of times just for fun, no dumbbell,  he liked that!!

When it came to the long sit, I left his sight for approx. 30 seconds, went back & rewarded him with a treat, then left again, about a minute later he went down :(
I quietly went back, got him to sit, then stayed in the ring until the 3 minutes were up.  I praised him & left the ring & did not do the long down.

I decided right then that I was pulling him from the trial.  I made a promise to Kort to never take any of this "stuff for me" seriously again.  If he was stressed then we just would not do it.

Maybe Kort is not meant to be my first CDX/UD dog, or maybe he is & just needs more time & training.  That is ok, he loves Agility &  Scenthurdle, & we are about to start Tracking.
I have lots of other sports I can do with him. 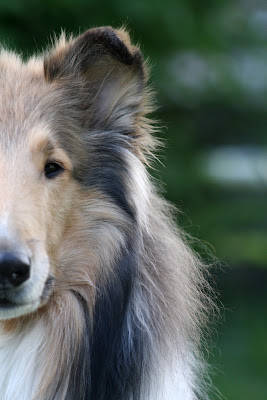 Well my little buddy Kort & I are finally entered in our first Open Obedience Trial in over a year!
I entered only 1 trial, on Sunday.  I have found out the hard way that Kort is a one trial a weekend guy, any more then that and he stresses.
I am confident in Kort, he has come a long way in this past year & I'm going in with a positive attitude as well.  This weekend will not be about passing, but about having a confident happy dog in the ring.  Oh, & remaining sitting for the long sit exercise would be a bonus!
Posted by onecollie at 9:45 PM 6 comments:

I can't believe that 2 years has gone by since I told Liz I would like to be placed on her waiting list for a puppy!!  It has flown by!

So now the hoping begins.  We hope Cava will get pregnant for starters!  Mother Nature has her own ideas sometimes & that is ok.  I am willing to wait, I know what I want, & who I want my puppy to be from, so if not this time, then next.

I actually fell in love with Flatcoated Retrievers years ago when I lived in Thunder Bay.  There were a couple of them in my tracking group, they are funny, & energetic, happy & smart. So, when I moved to Lethbridge & met Liz, I decided, I am getting a Flatcoat, & I'm getting one from Liz.
They fit my personality so well.  I LOVE my collies, & there WILL be another collie in my life, but I must have a Flatcoat first!

I don't care what colour, black or liver is fine.  In this litter there will be the possibility of both colours.  As to the sex of the puppy. I really want male, but I "might" consider a girl if there are only girls in the litter, or the boys are not show potential.

If all goes as planned puppies will arrive in February & be ready for their new homes in May, sooooo exciting! 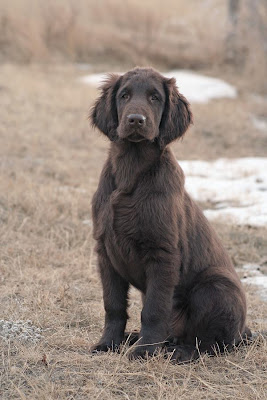 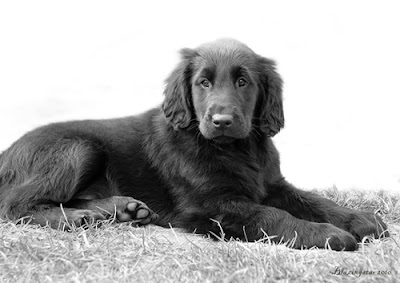 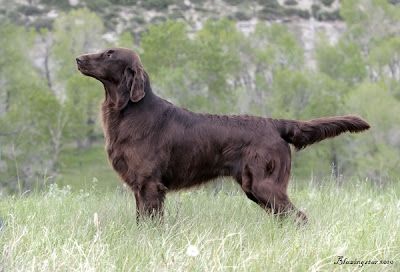 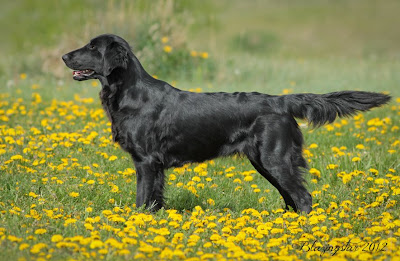 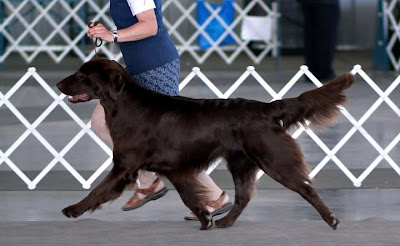 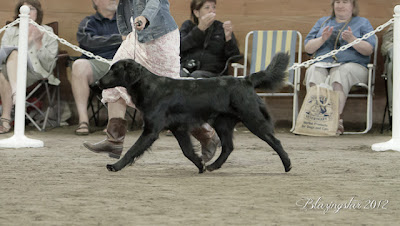 A yesterday's Fun Match Kort was such a good boy! He had his first "quailfying" run.  I had originally posted on Facebook that he got a 183/200, but he actually got a 187/200, I grabbed the wrong dogs score sheet!
Amanda is a hard marker & does not do favours score wise , she marks it as she sees it, so I was very pleased!

You can see he enjoys Open more then Rally :)

On Sat. I drove up to Red Deer with Liz.  It was an awesome one day trip, I got to talk all about Flatcoated Retreivers!

It was also Kort's first time back in the ring since August 2011 when he had his meltdown.  I have worked so hard to bring back the old happy, non stressed out, Kort.  I can't say he wasn't stressed in Red Deer, but he was able to work through it & remain focused on his job.  We were rewarded with Kort's final Rally Excellent leg to give him his title & a pretty good score of 93/100!
In the video you will see on the back up heeling Kort wraps behind me, this causes me to step on him , I felt bad but was very proud of Kort for bouncing back & continuing to work for me :)

I could not have gotten Kort back to this point by myself, so many thanks to Amanda for helping me to work with Kort.  Amanda & I don't always agree on everything in regards to Kort & his training, we have had our share of disagreements, but it is finally all coming together  !!

Here is his video from the trial....A very very proud moment for me , how I have missed being in the ring with my buddy ♥